How to start a demilitarization project

Here are some tips of important elements to look for when starting a demilitarization campaign. 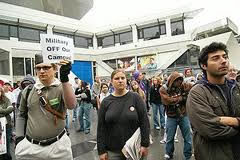 The most direct way to demilitarize research is to force the cancellation of a militarized research project. This would require finding an example of militarized research that is clearly going to contribute to the development of harmful technologies so that there would be widespread support for ending the research. A cancellation of this kind is in itself one of the most important steps towards demilitarization, but it can also serve as an important tactic for forcing an administration to implement transparency or ethics policies for military research. The implementation of a policy is a way for an administration to appear as though they are dealing with the issue of harmful military research, and it also provides them with a means to defend themselves against controversies in the future.

The parameters of an ethics policy could vary considerably, but in general they are intended to evaluate cases of militarized research and determine if they could cause more harm than benefit. The advantage of university policies is that they could consistently apply to many research projects over many years, whereas the capacity of activists to investigate and challenge militarization is always more limited. Currently, there are not any military research ethics policies for universities in Canada, (or the U.S.A.) and the administrations of the major research universities have stated that they are reluctant to implement these policies on the grounds that it would restrict academic freedom. However, this reluctance is not an insurmountable barrier. With enough effort, administrators can be pressured and convinced to take a new position in favor of ethical research.

Unlike regulatory ethics policies, transparency policies do not directly have any effect on what research a professor is permitted to do. Therefore, it cannot be argued that they restrict academic freedom. However, they could still be an important step towards demilitarization by requiring that professors publicize all funding and collaboration connections with military agencies, as well as the potential uses of their research to the military and possible harmful applications. Making this information public would make the extent of militarization more public, would make it more difficult to claim that cases of militarized research are harmless, and would provide an important resource for future demilitarization campaigns aimed at stopping a project or implementing an ethics policy.

Opposing military recruitment on campus is another important aspect of demilitarization, and should always be opposed along with militarized research. For example, the student newspaper can implement a policy banning military advertisements. Similarly, there can be a ban on military recruiters on campus, or against the posting of military posters or advertisements. We must oppose the militarization of both our bodies and our brains!

BUILDING SUPPORT FOR A CAMPAIGN

Professors who support the demilitarization of your university are a critical resource for investigating militarized research and building a campaign against it. They may know of past instances of opposition or controversy over militarized research at the university, and they will have a more intimate knowledge of the policies and procedures surrounding research, transparency, and ethics at the university.

SCIENCE AND ENGINEERING STUDENTS: Since militarized research often takes place within science and engineering departments, it is politically significant for students in these departments to express their opinion against the militarization of research. Furthermore, the technical knowledge of science and engineering students can be useful in understanding the potential military applications of research projects. A good way to start discussing militarization with engineering students is through the group Engineers Without Borders (EWB), which has chapters through Canada. EWB has a progressive mandate that primarily focuses on development work, but also relates relates to peace issues, so chapters have supported demilitarization campaigns in the past. (In the case of U.S. based activism connecting with  groups like Federation of American Scientists, or the Union of Concerned Scientists, whom have fostered arms control policies, may stand behind a concern for research that could be deemed aggressive or could proliferate an arms imbalance or race between countries. Allying with a union of concerned scientists could present some pressure to challenge a universities research policies but it is not clear how progressive are the aims of the scientific community post 9/11. Security concerns and the self interests of a burgeoning economic sector stemming from the specter of global terrorism has reduced the effectiveness of these types of alliances. Less prestigious groups like Scientists Without Borders or Global Union of Scientists for Peace are working towards changing the direction of scientific research towards peaceful means but lack the authority to have a great effect)

STUDENT UNIONS: Passing a motion in your student union council or general assembly can be a good way of raising awareness of militarization of campus. The union also has resources and some ability to participate in the governance of the university and negotiate with the administration in ways that can be useful for a campaign.

Articles on the web: