OPPOSE THE MILITARIZATION OF YOUTH 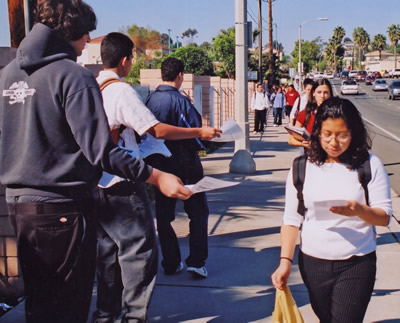 U.S. citizens that are proactive in opposing war must help shape the tone of anti-war and peace conversations to be more inclusive of the counter-recruitment analysis. The National Network Opposing the Militarization of Youth (NNOMY) is integral in bringing local, regional, and national peace and human rights groups together to help the nation understand that providing ALL youth with peaceful and viable alternatives to achieve success in life is an important sign of a civilized society. Source: NNOMY

The National Network Opposing the Militarization of Youth (NNOMY) is a network of organizations that stand up against the militarization of schools and young people in the USA.

NNOMY was founded in the aftermath of the 2004 national counter-recruitment conference "Stopping War Where it Begins" in Philadelphia.[1] It is intended to be a decentralized and flexible structure that helps national, regional and local activists and organizations by promoting communication efforts and by stimulating collaboration between network members. NNOMY organizes actions and campaigns against militarism in order to raise awareness and to increase education on the topic.

Other participating groups and organizations were Veterans for Peace, Fellowship of Reconciliation, Youth Activists/Youth Allies (NY City) and Coalition Against Military in Our Schools.[1] Alliance for Global Justice and War Resisters League sponsor actions of the network.

A National Call: Save Our Civilian Public Education

This campaign was a national call endorsed by 50 national leaders, activists, and educators in the peace community to peace and justice organizations alerting them to conservative forces in the Pentagon and their extending corporate influence on the learning environments of the K-12 and public universities.

This project, organized in collaboration with CODEPINK, had the goal to remove invested assets from companies, which supplied and profited from militarization. The campaign wanted to provide broader opportunities to young people who look for community service alternatives to the military.[6]

In collaboration Project YANO and NNOMY created a Guide to Removing Marksmanship Training from High Schools. That guide pointed to accomplishments of national and regional groups to:

This was a national leafletting campaign, directed to acquaint youth with the reality of military enlistment and alternative opportunities to the military service.[8]

Veterans For Peace and Counter-recruiting

This project is for raising public concern about Pentagon's militarization efforts on youth by providing personal experience of veterans and other activists.[9]

Source: https://en.wikipedia.org/wiki/National_Network_Opposing_the_Militarization_of_Youth
(NOTE: Some links have been changed outside of Wikipedia due to groups that do not have Wikipedia pages and directed to the best descriptive information on the cited organization)

NATIONAL NETWORK FORMING TO OPPOSE THE MILITARIZATION OF YOUTH