House votes down proposal to defund the Selective Service System 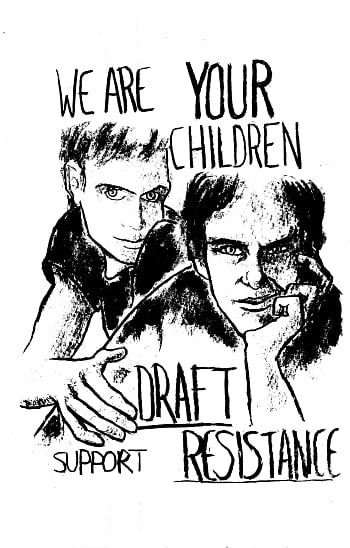 This week, during consideration of the annual funding bill for the Selective Service System and miscellaneous other agencies, the U.S. House of Representatives:

The effect of these two votes is likely to be limited. But in their current context, they are not a good sign for opponents of conscription and war, and confirm the need for continued, expanded, and more visible resistance to draft registration.

The second of these votes, the one today approving an amendment to forbid Selective Service System funding from being spent in FY2017 on expanding draft registration for women, went the right way but will have almost no effect, even if the Senate agrees to this provision in the final bill. That's because registration of women for the draft isn't proposed to start until FY2018, and thus wouldn't require any funding in FY2017.

The current proposal to expand draft registration to women is contained in the Senate version of a separate Department of Defense authorization bill. That bill would set policy but doesn't contain any funding for this program. The Selective Service System is not part of the Department of Defense, and is funded separately as an "independent" agency. But the Senate version of the National Defense Authorization Act provides that women would be required to register for the draft, if men are required to register, beginning with women born in 2000. These women would have to register beginning when the first of them turn 18 on 1 January 2018.

Federal Fiscal Year 2017 runs from 1 October 2016 through 30 September 2017. If Congress decides to start registering women on 1 January 2018, and provides funding next year in FY2018, the Selective Service System would have three months between the start of FY2018 and the start of calendar year 2018 to use that money to prepare to start registering women, even if the agency is forbidden from spending money on any planning or prep work earlier in FY2017.

Is that enough time? Three months might seem short to prepare for a doubling of the agency's workload. But in 1980, when nobody had been required to register for the previous five years, the Selective Service System came out of "deep standby" and started registering men for the draft far more quickly than that. The bill providing funding for the resumption of draft registration was signed into law by President Jimmy Carter on 27 June 1980, and registration of men born in 1980 began on 21 July 1980, less than a month later. (One of the main reasons that funding for draft registration wasn't approved sooner was that Congress was arguing in 1980, as it has been arguing again this year, about whether to include women as well as men in draft registration.)

That experience with the quick start of draft registration in 1980 suggests that the ban proposed by the House on the use of FY2017 funding to register women for the draft wouldn't preclude registration of women from starting on the schedule contemplated by the Senate in FY2018.

Erroneous news reports that this amendment would (if also approved by the Senate and signed by the President) bar or preclude registration of women for the draft appear to have been written without consideration of the relationship between the timeline for the funding and the proposed start date of registration of women.

The potentially more significant of this week's House votes on this issue is the rejection, by a fairly overwhelming 294-128 vote, of the amendment proposed by Rep. DeFazio (D-OR) to remove all funding for the Selective Service System from the general appropriations bill.

For what it's worth, my Representative, Minority Leader Nancy Pelosi, was on the wrong side of both votes this week: Pelosi voted AGAINST defunding Selective Service, and AGAINST fobidding use of FY2017 funds to prepare to register women as well as men in FY2018. Given that a vote against draft registration would likely have been very popular with her constituents in San Francisco, her vote is a clear indication that the national Democratic Party leadership supports the continuation of draft registration for men, regardless of whether or not it is expanded to include women as well.

Rep. DeFazio is one of the original co-sponsors of H.R. 4523, a standalone bill to end draft registration, abolish the Selective Service System, and restore eligibility for student aid and jobs and other Federal programs to people who didn't register for the draft.

The defeat this week of Rep. DeFazio's much more limited amendment to defund Selective Service (but not de-authorize registration or end the administrative sanctions against people who didn't register) suggests that H.R. 4523 has almost no chance of approval this year. It's still important, however, to encourage members of Congress to endorse this bill, to build support for a similar bill that in the new session of Congress next year, after the Presidential election, when it is likely to have a better chance of passage.

This week's actions in the House confirm that the people must lead Congress on this issue (as on many others) through nonviolent direct action, not look to Congress to lead us toward peace or freedom.

Ending draft registration or preventing its expansion to women as well as men will come neither through protest (in 1980, tens of thousands of people took to the streets to protest the reinstatement of draft registration, with no perceptible effect on Congress) or through persuading members of Congress that they don't want a draft. It can come only through a visible showing of commitment to resist on the part of young women, starting with those born in 2000, and of support for that resistance by men and women of all ages. Visible and well-supported resistance is the only thing likely to be able to convinces Congress and the President that -- whether they like it or not -- forcing young women to register for the draft will be impossible, just as forcing young men to register has proven impossible for the last 35+ years.

Continued, expanded, and more visible resistance is the only way that we will stop the continuation and expansion of draft registration.