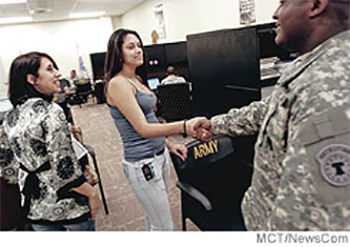 Truth in Recruiting is the foundational principle that directs the work of multiple Counter-recruitment groups inside the United States of America and territories. It has the essential mission to inform students, parents, and school teachers of the disparities that exist in the information that military recruiters are presenting to American Youth about military service in our schools. Since the implementation of a voluntary military force, the need to develop a vigorous campaign by the Department of Defense has led to aggressive recruitment quotas and encouraged unethical tactics of appeal to capture and encourage the interest of youth to join into the military forces. Recruiters have compromised the telling of the real facts of what it means to serve in the military services and appealing to parents with overstated educational and career benefits and to young people with the promise of travel and a "life adventure" that masks the real risks to their physical and mental health as they move forward into their lives.

1. Recruiters lie. According the New York Times, nearly one of five United States Army recruiters was under investigation in 2004 for offenses varying from "threats and coercion to false promises that applicants would not be sent to Iraq." One veteran recruiter told a reporter for the Albany Times Union, "I've been recruiting for years, and I don't know one recruiter who wasn't dishonest about it. I did it myself."

2. The military contract guarantees nothing. The Department of Defense's own enlistment/re-enlistment document states, "Laws and regulations that govern military personnel may change without notice to me. Such changes may affect my status, pay allowances, benefits and responsibilities as a member of the Armed Forces REGARDLESS of the provisions of this enlistment/re-enlistment document" (DD Form4/1, 1998, Sec.9.5b).

3. Advertised signing bonuses are bogus. Bonuses are often thought of as gifts, but they're not. They're like loans: If an enlistee leaves the military before his or her agreed term of service, he or she will be forced to repay the bonus. Besides, Army data shows that the top bonus of $20,000 was given to only 6 percent of the 47,7272 enlistees who signed up for active duty.

4. The military won't make you financially secure. Military members are no strangers to financial strain: 48 percent report having financial difficulty, approximately 33 percent of homeless men in the United States are veterans, and nearly 200,000 veterans are homeless on any given night.

5. Money for college ($71,424 in the bank?). If you expect the military to pay for college, better read the fine print. Among recruits who sign up for the Montgomery GI Bill, 65 percent receive no money for college, and only 15 percent ever receive a college degree. The maximum Montgomery GI Bill benefit is $37,224, and even this 37K is hard to get: To join, you must first put in a nonrefundable $1,200 deposit that has to be paid to the military during the first year of service. To receive the $37K, you must also be an active-duty member who has completed at least a three-year service agreement and is attending a four-year college full time. Benefits are significantly lower if you are going to school part-time or attending a two-year college. If you receive a less than honorable discharge (as one in four do), leave the military early (as one in three do), or later decide not to go to college, the military will keep your deposit and give you nothing. Note: The $71,424 advertised by the Army and $86,000 by the Navy includes benefits from the Amy or Navy College Fund, respectively. Fewer than 10 percent of all recruits earn money from the Army College Fund, which is specifically designed to lure recruits into hard-to-fill positions.

6. Job training. Vice President Dick Cheney once said, "The military is not a social welfare agency; it's not a jobs program." If you enlist, the military does not have to place you in your chosen career field or give you the specific training requested. Even if enlistees do receive training, it is often to develop skills that will not transfer to the civilian job market. (There aren't many jobs for M240 machine-gunners stateside.)

7. War, combat, and your contract. First off, if it's your first time enlisting, you're signing up for eight years. On top of that, the military can, without your consent, extend active-duty obligations during times of conflict, "national emergency," or when directed by the president. This means that even if an enlistee has two weeks left on his/ her contract (yes, even Guard/Reserve) or has already served in combat, she/he can still be sent to war. More than a dozen U.S. soldiers have challenged "stop-loss" measures like these in court so far, but people continue to be shipped off involuntarily. The military has called thousands up from Inactive Ready Reserve -- soldiers who have served, some for as long as a decade, and been discharged. The numbers: twice as many troops are fighting in Iraq and Afghanistan per year as during the Vietnam War. One-third of the troops who have gone to Iraq have gone more than once. The highest rate of first- time deployments belongs to the Marine Corps Reserve: almost 90 percent have fought.