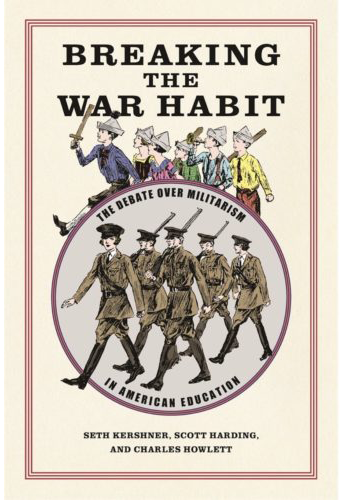 With United States troops fighting imperial wars in the Caribbean and the Philippines at the end of the 19th century, and with the drumbeats for war in Europe soon to follow, the federal government encouraged and funded summer training programs for college students and the establishment of ROTC. Noting the growing concern over the increased immigration from southern and eastern Europe, supporters of military training argued “that military drills could teach the male immigrant the fine art of being a man.” Nonetheless, opposition to the call for militarism grew from rank-and-file teachers, college students, and peace groups. Socialists, mindful of the use of the National Guard and state militia in breaking major strikes in the recent past, joined the fray. However, as is often the case, when the country becomes engaged in war, during World War I dissent is punished, and “demands for total loyalty swept through the entire American system.”

The 1920s and the first half of the 1930s could perhaps be called the golden age of opposition to militarism in education. While other peace groups, including the War Resisters League and the Women’s International League for Peace and Freedom, preceded them, the Committee on Militarism in Education (CME) would become the major national group committed to ending military training in high school and compulsory ROTC in colleges. The CME wrote and lectured against a militarist “mindset” that saw war as “inevitable.” The CME found allies in women’s peace organizations, and in notable individuals like Jane Addams, as well as in clergy groups such as the Federal Council of Churches, and nationally known clergy such as Reinhold Niebuhr and Rabbi Stephen Wise. During that period, oppositional pressure led 65 high schools and colleges to end all military training, and on April 22, 1936, some half a million college students were struck against militarism, with a particular focus on ROTC.

Not until the 1960s and ’70s would a comparable peace movement arise, in the struggle against the Vietnam War. Anti-ROTC campaigns brought an end to such programs on numerous college campuses, with enrollment plummeting from 260,000 in 1967 to 87,000 in 1972. With the end of the draft in 1973, and ROTC numbers falling, the Pentagon rapidly moved into America’s high schools to recruit teenagers. Peace activists fought back with counter-recruitment campaigns, leafleting students and setting up tables inside schools offering alternatives to the military. In 1976, U.S. Rep. Ron Dellums, a Democrat from Oakland, Calif., authored an amendment to the annual military authorization bill that would cut JROTC funding. Dellums didn’t have the votes but his statement, “It is more important that Johnny learn to write than that he gets his gun,” brought needed publicity to the issue.

In the 1980s, the authors presented a Baltimore case study where anti-recruiters highlighted the racist and classist nature of military recruitment but received pushback from military proponents who saw JROTC as an avenue of upward mobility for poor, Black youth. In 2002, a provision of the “No Child Left Behind Act” mandated that high schools allow military recruiters not only access to campus but student contact data as well. In response, counter-recruitment efforts increased, reaching a peak during the early years of the Iraq war.

Today, however, support from teachers, organized labor, and major religious institutions is lacking and volunteers struggle to increase their numbers and funding. One institution that never lacks funding, of course, is the Pentagon, and in the book’s conclusion, the authors focus on a popular military program, STARBASE, which brings “at-risk” fifth graders to military bases. There, for a week, they receive science instruction, embedded in “at least one full day [that] consists of uniformed military personnel extolling the benefits of a career in the armed forces.” Unlike his socialist forebears in the early 20th century, who campaigned against militarism in the schools, today’s most famous socialist, Vermont U.S. Senator Bernie Sanders, strongly supports the STARBASE program, a fact indicative of the overwhelming Congressional support for all iterations of American militarism.

It was not always this way, and the contribution of “Breaking the War Habit” reminds us of that, of the ebbs and flows of anti-militarism and the peace movement. In today’s political climate, just being aware of those “debate[s] over militarism in American education” is a positive step. This leads to an educational suggestion: Since not much is known about the history of those debates in Berkshire County, the influence of military recruiters in county high schools, and anti-recruitment efforts, why not encourage high school students to study that history in their school? There are resources available, including work done by The Resistance Center for Peace and Justice in Northampton. How do current students, teachers, and administrators feel about the military in schools? There are interviews to be done, Freedom of Information requests to be filed, and various archives to be examined. A good place to learn the skills to start such a project would be to consult “Breaking the War Habit.”

How Counter-Recruiters Take on the U.S. Military