Drones Are a Military Recruiting Issue 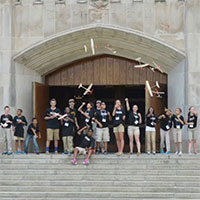 Over the past several years, activists have fought against the use of unmanned aircraft (commonly called “drones”) to carry out targeted killings in the war on terror. Anti-drone activists have aimed their protests at a number of different targets. They have condemned university research on drone technology (e.g., at Johns Hopkins), held spirited public demonstrations at launch sites (e.g., outside Hancock Air Force Base in upstate New York), and they have pursued more traditional forms of political lobbying. However, their strategy so far has failed to address the ways in which the public, including children, are taught to uncritically embrace this technology. In this article, I will call attention to the previously unreported use of drone simulators in Army recruiting vans and begin a discussion about how to resist their steady march across America.

The fleet of vehicles in the Army’s Mobile Exhibit Command (MEC) form a powerful weapon in the Army’s recruiting arsenal. A unit of the U.S. Army Accessions Support Brigade, the MEC helps meet the brigade’s mission of “ Connecting America’s Army with America’s People.” Their job is to normalize state violence, including drone warfare, and in FY2013, the recruiters driving these vehicles logged more than 600,000 miles traveling to schools, universities, state fairs, and other events in 48 states. What follows is a brief look at three vehicles from the MEC -- in particular, those that help children learn to love the Reaper.

The oldest of the three vehicles, the Army Aviation Adventure van, debuted in May 2002. Inside this converted 18-wheeler, van visitors will find Army careers kiosks, along with an ammunition display and an array of weapons simulators designed to immerse the visitor in real-life experiences. These include an Apache Flight Simulator, a Kiowa Warrior Flight Simulator, and an Unmanned Aerial Vehicle (UAV) Simulator, which, according to one source, is based on the Hunter drone. While the high school and college market is the van’s primary target, a quick review of news stories on the Web turned up one report of a nine-year-old trying out the van’s simulators.

With all the free publicity provided by the success of the film Zero Dark Thirty, you’d think that the Green Berets wouldn’t need their own vehicle in the MEC fleet. But as long as “night raids” continue to be a focus of American military activities abroad, this elite force will have to recruit for the future. Hence, the need for an Army Special Operations Adventure van, tricked out with simulators that allow visitors to experience a virtual counter-insurgency: firing a .50 cal. atop a “ground mobility vehicle” (Humvee), flying an AH6 “Little Bird” helicopter and -- of course -- piloting a drone.

The newest vehicle in the MEC, launched in 2012, is the Army STEM Experience, which purports to teach math and science skills in a military context. (According to a slide from a declassified Army PowerPoint presentation, this vehicle is also a good wedge for breaking into “hard-to-penetrate schools. ”) Through interactive video monitors and “virtual meetings” with military advisors, visitors are propelled into the year 2032 where they must use their skills in the STEM fields (science, technology, engineering, math) to respond to a terrorist attack. One possible solution: using a drone to defuse the crisis and save civilization. On the Facebook page of the STEM Army Experience (which is apparently the only vehicle in the MEC with a presence on social media), one can find pictures of elementary school-aged children cavorting with recruiters. Remember, kids: You’re never too young to rain death by remote control.

The American public, and especially children, are learning to accept the military use of drones. Army recruiting vans and drone simulators like the ones described above represent what communications scholar Roger Stahl calls militainment: “state violence translated into an object of pleasurable consumption.” While it may not be possible to totally reverse this militarizing trend, there are openings for activists. Stahl suggests that it is up to the responsible citizen to counter the “seductions of the entertaining war” by seeking out and exposing their internal contradictions.

How to resist? First, find out which schools in your area will be targeted by these vehicles (see below) and contact school officials requesting that they cancel the visit. Activists can also demand equal access and demonstrate on the date of a van’s visit.

This is a perfect opportunity for counter-recruiters to partner with anti-drone activists from organizations like Veterans for Peace, Code Pink, and Upstate Drone Action. Together we can step up and do something to prevent the Army from bringing its drones into schools.

Schedule of visits by the Army STEM Experience Recruiting Truck:

Seth Kershner is a reference and instruction librarian at Northwestern Connecticut Community College.