Researching Pop Culture and Militarism: Can video games be anti-violence? 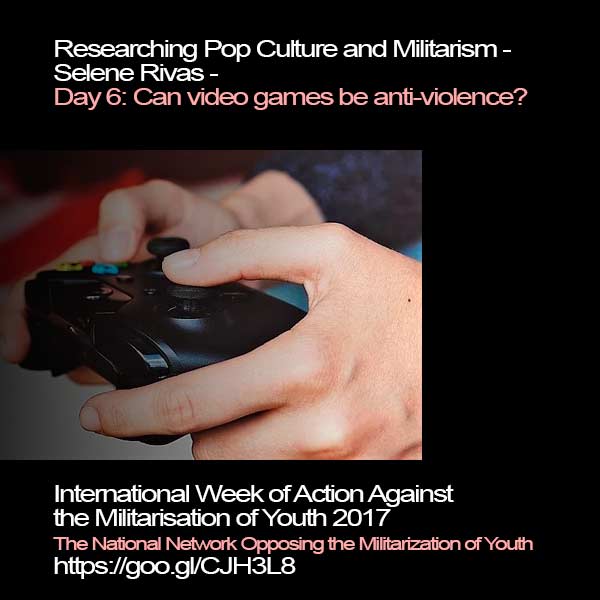 For this installment in the series about Pop Culture and Militarism, we'll discuss video games. Instead of looking at them from the narrow focus of the militarism present in games, or the militarization that they can cause, we'll explore violence in video games. Similar to the end of the last article, where we explored the question of what an "anti-war" film would look like, this article will attempt to figure out what an “anti-violence” video game would be like. This is an attempt to give options to people who are against the normalization of violence and war, if they or their children wish to play video games. The approach taken in this article will be to explore game mechanics, and how they might be used as persuasive devices to propagate certain ideas and world views. After this, the subject of violence and nonviolence in video games will be broached, specifically how the mechanics can contradict narratives which intend to be anti-violence.

When talking about the militarization of a society, we are also talking about the normalization of institutional violence. There are many dimensions in video games that can be analyzed; their potential effects on players, explored; their embedded messages, whether intentional or not, deconstructed. Many scholars and researchers have attempted to settle the debate of whether or not playing video games has a positive correlation to aggressive behavior, hostility, or violence. Given that the debate is still a point of contention for many, and that there is already a copious amount of arguments done by experienced investigators on both sides, this will not be discussed on the article. Likewise, much has been written using representational approaches to the narrative of games, that is, how certain characters and events in-game represent larger concepts in the real world. This is related to the approach we used in the previous article: how Hollywood representations of war have affected and been affected by the sociopolitical events and interests which surrounded them. Instead, it might be more interesting to explore the relationship between affect (a concept that will be defined presently) and representation inside of game mechanics.

The prevalence of games in homes around the world makes them, along with television, movies, and the internet important arenas where certain ideas are bought, sold, or transmuted. Unlike television or movies, however, there is an added dimensions: the length of a game often requires a player to invest a significant amount of hours. Additionally, the ability to interact with the game world through game-play makes them much more immersive experiences, and give players more agency when shaping the narrative. Communities are often parts of the game instead of peripheral to it as well. As stated above, there are copious amounts of articles, books, papers written that address the way representation is handled in games. These representations are "...how they are rooted in, and in turn project, social, sexual, and political norms."1 Just like other media, games are vehicles for the normalization of certain thoughts and ideas. For instance, much has already been said about the role of women in video game narratives, or how their traits (physical and in personality) are not as varied as those of male heroes. Enemies, too, have often been criticized, both their racial and geographical depictions.

The problem many see with this representational approach is that there is still a lot left to study empirically regarding how these representations are parsed by players. As discussed in a previous article, popular culture is not just the object in itself, but how people resignify these objects, and live with them in their world.

Some have argued that another form of studying video games is through their effect, or pre-cognitive emotions such as fear, joy, disgust, anger, or sadness that games seek to elicit. This approach, however, does not preclude representations, but instead both are intimately interconnected, and, as Shaw and Warf put it: " ...the spaces in video games possess an effective excess, with virtual worlds increasingly 'spilling out' of the screen to affect the player in banal, exciting, or unexpected ways."3 Affects are the responses and reactions that are elicited by games, either representationally (voluptuous woman with suggestive animations could incite arousal in a player, for instance), narratively (feeling saddened at at the death of a character), or through game mechanics (feeling joy when being rewarded, either in-game or through sounds and visuals, for performing certain actions correctly). Because of their interactive nature, affect is being consciously being elicited by game designers to signal for the player the correct and incorrect ways to play and enjoy a game.

However, just as representational logics can be found inside of narrative and visuals, game mechanics can also be thought of as representational of real world processes. An excellent example of what this would look like is discussed by YouTube user Errant Signal, when reviewing the game Civilization V. He enjoyed the game as a child and found it educational, but now sees "...the underlying rhetoric at play here, the assumptions baked into its metaphors and the arguments being put forth by its mechanics."4 He goes on to say that the game does not show "...the actual patterns of history, but patterns of a specific lens through which it views history."5

He lays out his arguments in the following video:

The idea of "game mechanics as metaphors" is certainly quite interesting, and has been explored and intentionally put to use in several games. This is a list of a few:

So, can the representations found and effects elicited by the narrative be contradicted by the game mechanics? Or, close to what concerns us, can games that condemn violence and war narratively be contradicted by the game mechanics? This would be similar to the argument made in the previous article, where filmic language is intrinsic to, not set apart from, the messages the movie is trying to convey. The similarity of these two cases comes from how every work of art or culture has multiple levels which must be considered when analyzing what it is trying to say. More often than not, how it is said is as or even more important than what is being said. Video games pose an exciting challenge to the analyst precisely because it has added layers which complicate the puzzle: "Unlike static visual media, such as film and comics, the interpretable content of a video game is generated by the interaction between its rules and players."6

When it comes to war games, "...Spec Ops: The Line is a prime example of a critical military video game because it questions the legitimacy of US interventions in the Middle East and disrupts the conventions of military gaming."’7 This game, though having violent, fairly generic shooter mechanics, addresses these mechanics and their implications inside the narrative. In the following video, Errant Signal makes the case for the game:

Whether this game is an example of ludonarrative dissonance or assonance is debatable. As others have pointed out, there is no option available within the game to avoid committing the atrocities it condemns. Here we see once again, the multidimensionality of games rearing its head: when discussing Full Metal Jacket and Apocalypse Now, we talked about how the horrors of war are depicted in their whole confusing, unjustifiable messiness, and how these contrast with movies that glorify war, whether aesthetically or in its ultimate intent. They're anti war stories because war is depicted in itself as the only justification for all the horrors it produces, instead of being for a greater good. The audience exist as bystanders, and no matter how immersive these fictions are, we can't make a choice that will change the course of the narrative.

The interactive aspects of games enable this option. However, are games like Spec Ops, that ultimately condemn violence but give you no option within the game to not engage in it, really anti-violent video games? It's an interesting question

Even if you don't agree that video games can cause violent behavior, please consider that by buying a war game, you might be directly contributing to the arms market: