Researching Pop Culture and Militarism: What is normal? 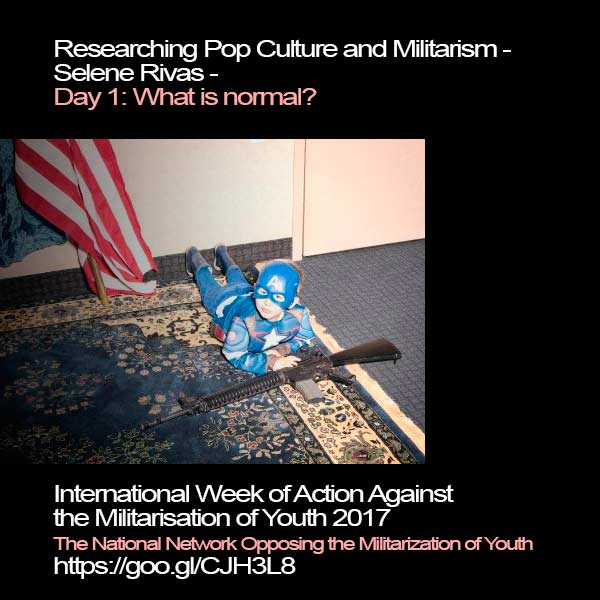 "Human beings are consumers of vast quantities of raw materials and fuels. A tremendous amount of waste materials results from this use--individual, societal, industrial, and accidental."1

Is this sentence a fact, or an opinion? When starting a sentence with "human beings are..." or "human nature is...", who determines whether what is being said is fact or fiction? History? One’s own experiences or philosophy? Is there such a thing as normal human behavior anyway?

In the following article, we'll discuss how "normal" beliefs, actions, and practices are not, despite being often assumed to be so, universally defined. They are products of a specific context, and are often used to judge others outside of it.

As a simple example, take eating with a knife and fork: for descendants of most European traditions and cultures, this might seem so normal that after childhood, most don't have to think about how to hold these utensils, coordinate them to scoop food up, or cut a particularly tenacious slab of meat. Eating with a knife and fork is normal. A person who comes from a wholly different cultural tradition, however, might disagree. The inhabitants of many Asian countries are used to handling chopsticks as their primary eating implements. While a person born and raised in the Western side of the globe might struggle to even hold them correctly, people who grew up using them don't need to think about it. Eating with chopsticks is normal.

And yet, each might look at the other and deem their habits "exotic", "unusual", and even "abnormal". Normal is what a group of people within the same context are used to thinking as “the norm”. “The norm” in different place, cultures, and peoples is incredibly extensive, and encompasses a very wide range of things.

Let's take colors as another basic example; it is easy to assume that colors are universal, both the ones we could call "basic" (yellow, green, blue, purple, pink, red, orange, brown, black, gray, white), and the concept of "color" in itself as a stand-alone adjective. However, anthropologists and others who study different cultures have found that neither of these conceptions are universal, nor are they constant through time. For instance: "Before around the year 1500, a word for orange did not exist in the English language."2 When it was introduced, "orange" would have been exotic and strange, unlike the present, where it is so normal in our language that we include it in flashcards and educational materials aimed at toddlers.

The same goes for musical scales. Just as with eating utensils, it is not a surprise that different types of music have come from different cultural traditions and social groups, such as Jazz, the Waltz, Rock and Roll, or Salsa. Beyond these easily discernible differences, though, traditions around the globe have also come up with different musical scales used to create music. For European traditions, the scale goes:

Musical instruments such as pianos are arranged with these notes in mind.

In the Chinese tradition, though, we find this scale:

It sounds as though the Chinese scale was the same as the European one, with some notes missing. This is because both are being compared to the other. The Chinese used it to compose and arrange music, and luthiers created instruments arranged to play these notes. Nothing is missing, nor is it lesser and greater than the European tradition.

The exercise of studying the aspects of different groups of people's lives that they might not even think about or consider noteworthy is nothing new, and in fact has a tradition spanning hundreds if not thousands of years. Studying what people are used to, indeed, is an aspect of studying culture, what they consider normal. The study, classification, and exposition of culture, in its different forms, can be thought of as the major goal in the discipline of anthropology.

This short sample of customs is meant to excite the imagination. What other things are different elsewhere? There is really an astonishing variety in what "normality" is; "normal" is socially-defined, what you're used to doing or seeing, and it doesn't come from nature. Eating with a knife and fork isn't more normal than chopsticks for everybody, nor is it better or worse. It's just different.

Baby bottles, jeans, the banking system, coat hangers, shoes… all of these things we take for granted were not always present in human life, and even now, cultures have yet different ways to solve similar problems or even conceive the world that we can’t even imagine. Studies of different cultures has shown us that "all understandings of reality are cultural constructions"3, anthropology "offers alternative visions of how things could be", by first making us reflect on "the way things are"4.

Once this fact is wholly accepted, it becomes much harder to peg down the elusive (and possibly non-existent) "human nature", or "what human beings always are/or do". Sometimes what is taken to be as such comes from our experiences, our environment, or what we're told. Other times, defining what is "normal" (and, in turn, "human nature") can come from very particular interests who want to elicit specific beliefs or behaviors for their own benefit.

Is "human beings are consumers of vast quantities of raw materials and fuels" an assertion made to justify or support a society built on accelerated consumption, and in turn, wars whose aim is to gain control of more resources? Or is the society shaped this way precisely because that is what human nature is? If we were to find a group of people that historically or at present don't follow the same patterns of excessive consumption implied by the above quote, then it would ring as self-serving for those who consume "vast quantities of raw materials and fuels". By studying cultures, we can question the assertions which have shaped our reality.

This series of articles hopes to elicit questions regarding militarism, pop culture's role in portraying these tendencies as normal, and how these portrayals can be used to effectively militarize a society, particularly for the youth who are still trying to find where they fit inside the world. It doesn't aim to be comprehensive (it would take more than a lifetime to research on this issue if that were the case), but certainly comprehensible, thorough on the subtopics it hopes to approach, concise, and approachable for someone with no previous knowledge on the subject.

Next article, we will share some theories on how "normal" is created throughout history, and finally introduce our main topic: how the military's presence in almost all aspects of the United States’ culture has become normal.

To learn more about different musical scales and colors around the globe: 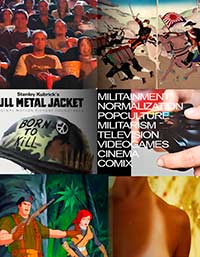