NNOMYnews is the newsletter of the National Network Opposing the Militarization of Youth. NNOMYnews reports on the growing intrusions by the Department of Defense into our public schools in a campaign to normalize perpetual wars with our youth and to promote the recruitment efforts of the Pentagon.

NNOMYnews also features reports on the saturation of militaristic themes in our entertainment, sports, and gaming offerings that have an influence on our society and on the impact of the military on our environment and health.

Please consider subscribing to this important bulletin and staying informed by clicking on the subscription link to the right.

We look forward to you joining with the many of us who are concerned about the threats of cultural militarization in our schools and communities that is threatening a civilian based democracy.

View Back issues below of the monthly NNOMY Newsletter and educate yourself about how U.S. cultural militarization impacts our schools, youth, and our society.

Also support The National Network Opposing the Militarization of Youth by Donating to our work.

Below are at list of NNOMYnews by edition number, date, and topic: (Click on the date to open the newsletter)

By both design and circumstances,  the United States of America is captive to its assigned role as world enforcer of free market capitalism. With military commands now assigned to each sub-continent of the planet, our military industrial intelligence complex has monetized its permanent war economy with arms sales coerced upon its client states under the false rubric of keeping the world free for unrestricted commerce.

How that all will work out for the  people and the planet is never clear in the endless rhetorical back and forth of its collapsing democracy and corporate controlled political culture. It is immersed in a morass of militarism normalized since its enculturated victory in WWII and has allowed its own self inflicted fable to permeate every aspect of its commercialized commons.

From a consolidated and complicit media to sports events and every expression of entertainment celebrating our military, the U.S. citizenry is bombarded with this spectacle of uniformed violence now consuming 7 1/2 hours weekly of over 40% of its male youth in ritualized virtual killing understood as harmless play in first-person shooter video games.

We have now made virtual killing a legitimized sport and have employed "experts" to convince any concerned sectors of our society that it is actually a healthy retreat from the pressures of our lives.

As the U.S. population reels under a poorly managed pandemic and businesses and jobs are lost and eliminated in a faltering main street economy, the military see's their recruitment opportunities increase as more young lives get directed into a bloated military serving as an international occupation force ensuring resource access to our industries.

All what is said here is unrecognizable to nearly all of the U.S. citizenry.

As the U.S. Presidential Elections consume all the media and cultural oxygen in the last days of October 2020, the theme has emerged among the two viable party candidates of who is more anti-war. Likely this theme is a cover for the military keynesianism that constructs our economy for both mainstream parties to not explain why we prioritize  the majority of discretionary tax funds for military appropriations and not more important civilian needs.

Additionally, this reality show election season distracts us from the hard economic conditions of declining opportunities that many youth are facing.

In this pandemic moment, the opportunities emerging for military recruitment efforts by the United States Department of Defense should not be ignored. The  recruitment appeals to youth in the newly minted virtual recruitment outreach strategies being deployed by the Pentagon have a cost to the national psychological health of our youth. Eighty percent of young men in the United States are involved in militarized gaming, online  and off,  where recruitment appeals are now present on social media platforms like Facebook and Twitch. One important opportunity available to us as counter-recruitment groups is to increase the breadth and consistency of our social media presentations and outreach on accurate Delayed Entry/ Future Soldier information as potential recruits change their minds and need reassurances and counseling on how to get out. It is an opportunity to save lives and an effective counter-recruitment practice in COVID-19 times when our entry to schools is limited or non-existent..

With the United States involved in permanent wars in the post 9/11 era fighting supposed continuous terrorism around the world and with the US now seemingly entering a new cold war with russia and china, veterans are increasingly experiencing higher rates of PTSD, toxic exposure injuries, and claims of the effects related to moral injury.

In this moment of the Coronavirus, the Pentagon's recruiting efforts at national public high schools have stopped as schools are closed in the traditional peak time for recruiters as school ends for the summer. Looking to expand the military recruitment efforts online, the military has turned to engaging in online gaming, much of it military themed, and increasing their outreach on other platforms where youth are to be found like social media.

Changes in the Delayed Entry Program / Future Soldier Program during the Covid-19 pandemic accommodate strategies for distance military recruitment and enlistment. These changes further position those enrolled in DEP to feel further obligated and trapped against changing their minds to enlist due to expanded advance payments and training before boot camp in a moment when there is mass unemployment and economic distress.

This pandemic month we visit different voices around our network talking peacemaking with social distancing. We are featuring the voices of students in peace clubs writing to us, activists from peace groups talking together in webinars, and on Zoom, and others concerned about how should be our society post Covid-19 and post militarism as well.Tracy High School Peace Club

As the Planet Earth confronts a global pandemic, the United States' Military Recruiting Commands adjust to the challenge of isolating their recruitment efforts to virtual military recruitment, now encouraged by the massive national unemployment reality in the country. While most of the citizenry hang on to an uncertain reality for their lives going forward in the remaining 2020 year, and maybe extending into 2021 as well, the Department of Defense takes advantage of the vulnerability of our youth as they try to find a place where they can havea place to provide an income, health benefits, and even food. This is a perfect storm for the Military Industrial Complex that see's its fortunes expand while the civilian sectors retract into recession.Army moves to 100% virtual recruiting as COVID-19 continues to spread

A campaign by the Earth Democracy Project of the U.S. Section of the Women's International League for
Peace & Freedom, has given an additional argument to Truth in Recruitment activists which is the fact of
military contamination health risks on U.S. military bases nationally and globally.

This issue of NNOMY News we re-introduce essential issues around counter military recruitment activism in updated versions.
One of the primary functions of the NNOMY network is to provide reliable information and we are in the process of updating
many of our core content issues. Check them out below:

California has the gratest amount of youth demilitarization groups in the United States. California also is the state with the most
defense spending. This issue of NNOMY News, we feature some of those groups that contribute to informing our youth with a fuller
narrative of what it means to serve in the military and directing young people to alternative careers that are not in the armed forces.

1041: February 1, 2020: Visiting Counter-recruitment Groups around the Internet | Back to Top

This issue of NNOMYnews, we visit Counter-recruitment groups from the NNOMY community of activists and check-in to see
what they are sharing on their social media.

The new face of military recruiting looks a lot like the old face issue, wise, only it is gauging what gains the attention
of Generation Z which means the virtual world of computer gaming. The new esports approach of the Department of
Defense is turning better leads and generating greater interest than the traditional high school recruitment strategies of
years prior without the problems of community regulation and counter military recruiting interference. The U.S. Army's
"What's Your Warrior'" campaign is right out of the video game playbook. The question is what does this mean for
Counter-Recruitment activists going forward into the new decade.

In advance of the next NNOMY newsletter themed, January 18 2020: The New Face of Military Recruiting, NNOMY takes a
look back at counter military recruitment practice and issues in the past decade to review where we have been as we
anticipate a new decade ahead for counter recruitment activism. A revealed cyber strategy of the Pentagon recruiting
command's plans to generate military recruits from Generation Z and those youth that have grown up in a world of virtual
realities will confront our struggle forward.

1028: August 2, 2019 How Militarism controls Our National Sports in America| Back to Top

1026: July 5 2019 How Militarism controls Our Political Culture in America | Back to Top 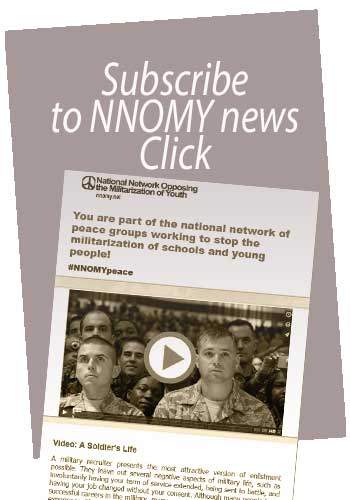