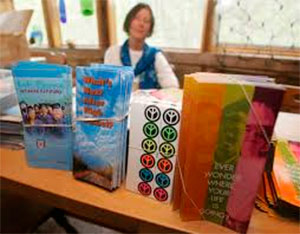 Equal access for non-students is explained in the 1986 ruling in San Diego Committee v. Governing Board of Grossmont Union High School District [790 F.2d 1471 (9th Cir.1986)]. In simple terms, equal access rests on the principle that once a government agency creates a forum for expressive activity on a controversial topic, access to the forum can be limited only so long as it is reasonable and not a façade for viewpoint-based discrimination. If the presentation of one point of view has been allowed, the forum must also be opened to those with an opposing view on the same topic.

The above document explains the following:

In the effort to counter the military in secondary schools, three main organizing models have developed:

· Educational activities organized in schools by students themselves (e.g. clubs and campaigns). Students have the right to speak out on issues in their schools whether or not the other side has already been presented. For more on students’ rights, including some legal limitations, see Guide to High School Students' Rights.

· Educational outreach conducted by students and/or non-students outside of official school channels (e.g. by leafleting on public property at school entrances). This does not require an equal access argument, though expressive activities on public property can be controlled by reasonable regulation.

· Attempts by non-students to get information to young people through the school system itself. This approach can sometimes require educating school personnel about the principle of equal access and forums on government property.

To establish equal access, an existing forum on the topic of military enlistment must be identified. Examples would be if military representatives were allowed to:

When these and other forums have been granted to military representatives, those with an opposing view have a legal right to the same access to students.

· Speech content that fits within the specific topic of the forum that has been established is legally allowed; for example, explaining the possible negative consequences of military enlistment and realities of the job, including war.

· Distributing a general anti-war message or information that is not directly related to what recruiters are saying would technically be outside the forum and could possibly be excluded.

This is a very complicated question that cannot be answered easily here, except to say that the courts are generally willing to overlook our constitutional rights when it comes to defending the ability of the military to recruit. Those who have been doing this work for a long time—including some who have used litigation—have learned that it’s more effective to reach out to students in ways that avoid threats of litigation; for example, by going initially to teachers and counselors, or seeking to reach students outside of school, rather than going straight to administrators or governing boards. Read more about the reasons for this in “Using Equal Access…,” and contact Project YANO for advice from those who have been involved in litigation and also learned to gain access without it.