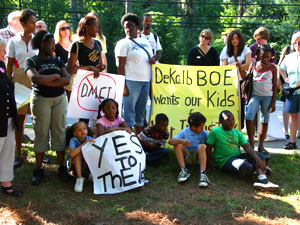 Tashawna Parker, 18, just graduated from Kenwood Academy on Chicago's south side. She can't wait to start classes at Northwestern University, where she will double-major in International Studies and Japanese Culture. But before she heads off to college, Ms. Parker plans on spending the summer working with the National Network Opposing Militarization of Youth.

A conference planned for Chicago from July 17-19, sponsored by the American Friends Service Committee, will bring together activists from across the midwest to discuss strategies to combat Pentagon recruitment tactics—tactics aimed at children as young as 13, according to the activists.

“It is important to let young people know joining the military is not their only option,” Ms. Parker told The Final Call. “When we would have college fairs at my school, the Marines would be there, but most of us would ignore them. Our school motto was ‘College is our mission,' so we would not pay attention to the recruiters.

“But, they recruited some of my friends outside of the school and one of the guys was told that he would receive a bonus for signing up his friends, so he got a lot of the guys to sign up,” Ms. Parker said.

“Students are mostly concerned with getting a good education, and they should be able to do that without the pressure of military recruiters in their schools,” said Darlene Gramigna, an organizer with the Chicagoland Coalition Opposed to the Militarization of Youth.

Opponents say the U.S. military continues to engage in tactics designed to recruit students under the age of 17. In Los Angeles high school administrators have enrolled students involuntarily in JROTC as an alternative to overcrowded gym classes; while in Buffalo, New York the entire freshman class at the Hutchinson Central Technical School, average age 14, was involuntarily enrolled in JROTC.

Ms. Gramigna told The Final Call the U.S. Army is “entrenched in the Chicago public schools system, which is 91 percent non-White, and 85 percent from low-income families. According to the American Friends, 44 of the city's 93 high schools have a JROTC, with 1 out of 10 high schoolers wearing a military uniform. Chicago is also home to six military academies.”

The July conference will be broken down into several workshops. According to Ms. Gramigna, some of the topics will cover the most current data on how activists across the nation are fighting the Pentagon's Madison Avenue-driven recruitment campaign. “We are going to talk about how to counter recruiter's propaganda, and other essentials in organizing communities to equip themselves with information that allows them to fight back,” Ms. Gramigna said.

She talked about a recent victory in DeKalb County, Ga., where parents and activists stopped the opening of a Marine Corps Institute that would have exposed students as young as 14 to military discipline, military culture and military training. “This is a big victory for our national movement against the U.S. military recruiting children,” Ms. Gramigna said.

Some activists are finding that victory over the government can be short lived. The cities of Eureka and Arcata, Calif. passed ordinances in 2008 that prohibited military personnel from initiating contact with minors for the purpose of recruiting them. The Justice Dept. filed a motion arguing that both measures are invalid and unconstitutional.

“If the federal judge rules in favor of the government that would invalidate our ordinances, without further opportunity to defend them,” said Dave Meserve of the Arcata-based Stop Recruiting Kids Coalition.

“We were to appear in Judge Saundra Armstrong's courtroom on June 9 to offer our oral arguments, but the judge cancelled the session, and said she would make a ruling sometime later in the week,” Mr. Meserve told The Final Call. It was “quite upsetting” that the judge would make such a critical ruling without giving the cities a chance to voice their positions, he said. “It is a travesty of justice,” Mr. Meserve added.

Activists expect a negative ruling and plan to appeal such a decision.

The national movement to stop child recruitment is gaining momentum, said Mr. Meserve. “We have been advising people across the country on how to introduce Youth Protection Acts in their cities and, in San Francisco, we are helping in the fight against the inclusion of the JROTCs in their school system,” he said.

The ACLU presented its report to the UN Committee on the Rights of the Child, which monitors compliance with the protocol. The UN group called on the U.S. to end military training in schools and to stop targeting racial minorities and low-income children for recruitment.

Opponents say the U.S. military continues to engage in tactics designed to recruit students under the age of 17. In Los Angeles, high school administrators have enrolled students involuntarily in JROTC as an alternative to overcrowded gym classes; while in Buffalo, New York the entire freshman class at the Hutchinson Central Technical School, average age 14, was involuntarily enrolled in JROTC.

In New York City, the Dept. of Education announced in February that nine high schools would be receiving JROTC programs designed as partnerships with the Army to teach students life skills, with soldiers “drilling students on how to set goals.” Opponents say the project is a recruitment tool that will expand to 20 high schools, and involve some 2,000 students, by the end of 2009.

In Philadelphia, activists from around the east coast have organized against the $12 million Army Experience Center (AEC), where students as young as 13 can involve themselves in shoot-em-up Army video games, three full-scale simulators including actual replicas of a Black Hawk helicopter and an AH-64 Apache Longbow helicopter with carbine assault rifles. The students can also see what it is like to ride in a real humvee, or a tank, in a virtual reality tour of an Afghan village where terrorists attack a U.S. medical aid convoy.

Students are required to register and receive an ID tag and can check a box on a sign-in form that says they do not want to be contacted by a recruiter. There are 22 recruiters, all in civilian clothes, at the facility, according to activists.

On May 2, hundreds of protestors representing some 30 national and regional peace groups converged on Franklin Mill Mall in suburban Philadelphia where the Army has placed its experimental AEC and served the recruiter in charge with a symbolic complaint. The “AEC is therefore involved in the criminal solicitation of minors to act in a violent manner, and are thereby promoting and supporting criminal and corrupt behavior,” it said.

The Army, on its website, said the AEC incorporates high-tech and traditional media devices to reach young men and women who might be considering a life in the service. The Army also says the AEC is not a recruitment tool.

When the AEC opened in August 2008, then-Secretary of the Army Pete Geren told reporters the center provided Philadelphia and Mid-Atlantic region residents a unique opportunity to learn about the Army.

Activists such as Jonathan Williams, national coordinator for the Student Peace Action Network, say the Army must not be allowed to continue to target teenagers for possible recruitment—whether or not they are old enough to be enlisted.

“The danger with the AEC is that the virtual games are a perfect opportunity to psychologically prepare and even mentally train children to fight in battle,” Mr. Williams told The Final Call.