2nd International Week of Action Against the Militarisation of Youth 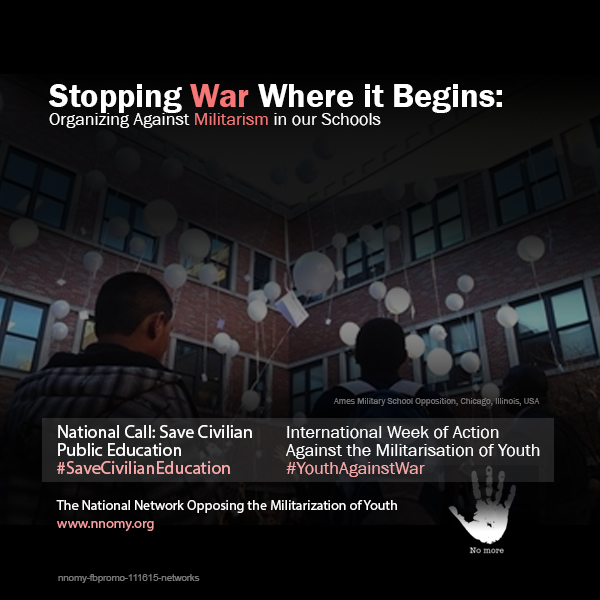 The National Call to Save Civilian Public Education is participating with other actions for the 2nd International Week of Action Against the Militarisation of Youth.

Over the last several decades, the Pentagon,conservative forces, and corporations have been systematically working to expand their presence in the K-12 learning environment and in public universities. The combined impact of the military, conservative think tanks and foundations,  and of corporatization of our public educational systems has eroded the basic democratic concept of civilian public education.   It is a trend that, if allowed to continue, will weaken the primacy of civilian rule and, ultimately, our country’s commitment to democratic ideals.

The signers of this statement believe it is urgent for all advocates of social justice, peace and the environment to recognize the dangerous nature of this problem and confront it with deliberate action. See the entire National Call at http://save civilianeducation.org

International Week of Action Against the Militarisation of Youth

Militaries across the world gain access to young people through education systems.It gives them an extraordinary chance to shape every generation's perception of military violence and lay the groundwork for future recruitment. See all the participating organizations worldwide at http://antimili-youth.net

Here is the list of events happening this week.
http://www.antimili-youth.net/articles/2015/11/week-action-against-militarisation-youth-events-happening-week