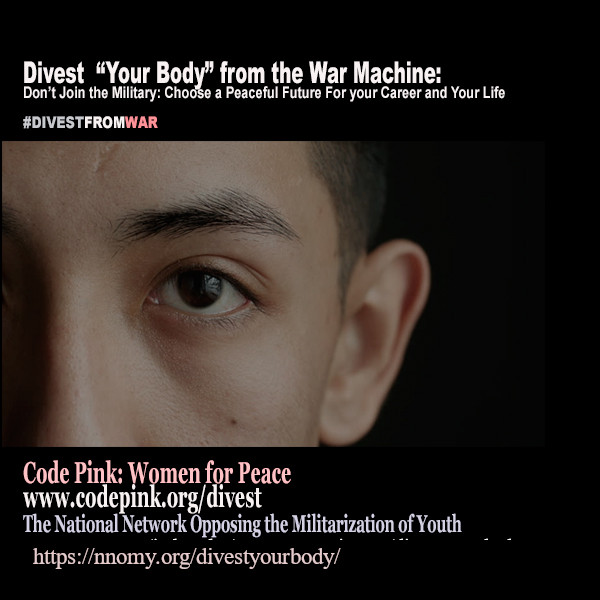 CODEPINK, in partnership with an array of peace and disarmament groups, has launched a divestment campaign to encourage universities, religious organizations, retirement funds, mutual funds, private investors, and other financial institutions in the United States to take action to reduce violent global conflicts and slow the hyper-militarization of our world by divesting from the U.S. War Machine. Divestment from the War Machine means divesting (removing invested assets) from companies that derive their profits by supplying and profiting from U.S. military interventions, expansions, and the militarization of our streets. In other words, we are calling for divestment from companies that make a killing on killing.

The National Network Opposing the Militarization of Youth is extending this divestment beyond how we support the vast and socially debilitating war industry with our dollars to include the idea of divesting of our bodies. Of course, from a humanistic point of view, your body is not a financial asset, but like so many things in our contemporary world, we have been reduced from citizens to consumers. And the military factors us in financial terms: the cost to maintain our training, deployment and, all too often, our health from being used as soldiers in endless wars and conflicts.

NNOMY has the hope that our participation will resonate with other peace organizations, inspiring them to take up the cause to tell our American youth to divest of their bodies to U.S. militarism, regardless of their prior interest in the military, patriotic appeals by military recruiters, peer pressure, wanting to continue family tradition of service, or wishing to believe that benefits offered by military service will help them determine a direction for their lives.

We realize that this is a great sacrifice for many who are facing limited opportunities provided by our economy, or are not able to pay for a college education at this time to move their lives forward. For NNOMY, this is a moral appeal to not risk harm to innocent others or themselves in a time of unending military conflicts based on a critical assessment of U.S. wars as not serving the security of our country or its citizens.

Many of those youth who seek out community service alternatives to the military will be serving inside their own communities and regions where there exists a great need for humanitarian assistance to aid in environmental and social crises that require our direct intervention. Those youth who can connect the dots of what real community service means for establishing a sustainable economy will be the real heroes challenging the future quality of all of our lives. We need to begin to send the message that the waste of military spending needs to be redirected from war profiteering to enlivening the communities where we live and to invest in renewable energy and away from extractive resources which are the source of much of our war-making.

The National Network Opposing the Militarization of Youth would also welcome Code Pink´s collaboration with us again in an active campaign of counter-recruitment in our public schools, especially those schools who serve our underprivileged students where we find the greatest military recruitment effort against our youth.

For peace and social justice,

From "Divest from the War Machine:" 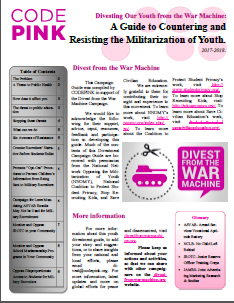 In Cooperation with Codepink's Divest from the War Machine campaign, The National Network Opposing the Militarization of Youth contributes this guide for demilitarizing our schools from the over-reach of a provision of the Every Child Succeeds Act that permits unrestricted access to military recruiters in our schools. This guide instructs activists how to lobby school districts to follow equal access guidelines and to organize communities, parents, teachers, and students to limit recruiter access to their schools.

Much of the contents of this Divestment Campaign Guide are borrowed with permission from the National Network Opposing the Militarization of Youth (NNOMY), National Coalition to Protect Student Privacy, Stop Recruiting Kids, and Save Civilian Civilian Education. We are extremely grateful to them for contributing their insight and experience to this movement. To learn more about NNOMY’s work, visit http://nnomy.org/index.php/en/. To learn more about Save Civilian Education’s work, visit http://savecivilianeducation.org/. 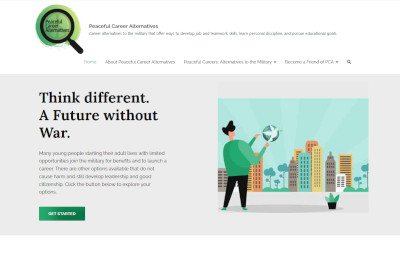 The Peaceful Career Alternatives website has been developed with the support of multiple national, regional, and local peace and religious organizations to provide young people deciding how to begin their productive working lives with alternative ideas and options without entering military service.
We encourage school counselors, parents, teachers, and most of all our youth, to utilize this resource before recommending or deciding on a military career and to network this resource to those considering enlistment 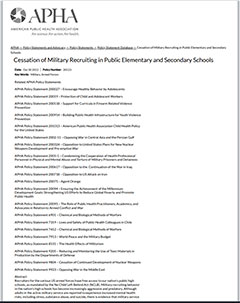 Recruiters for the various US armed forces have free access to our nation’s public high schools, as mandated by the No Child Left Behind Act (NCLB). Military recruiting behavior in the nation’s high schools has become increasingly aggressive and predatory. Although adults in the active military service are reported to experience increased mental health risks, including stress, substance abuse, and suicide, there is evidence that military service for the youngest soldiers is consistently associated with health effects far worse than for those who are older. This suggests that military service is associated with disproportionately poor health for those in late adolescence. These negative outcomes for teen soldiers, coupled with significant evidence that the adolescent brain is not equipped to make accurate risk calculations, leads APHA to conclude entry into the military should be delayed until full adulthood. For these reasons, the American Public Health Association opposes military recruiting in public elementary and secondary schools. APHA should encourage the United States to cease the practice of recruiting military enlistees in public high schools, specifically by (1) removing the No Child Left Behind Act requirement that high schools both be open to military recruiters and turn over contact information on all students to recruiters and (2) eliminating practices that encourage military recruiters to approach adolescents in US public high schools to enlist in the military services.

I pledge to work to Divest from weapons companies and invest in ethical, life-affirming solutions
The only way we can achieve a peaceful world is if we reduce the power of those who profit from war. 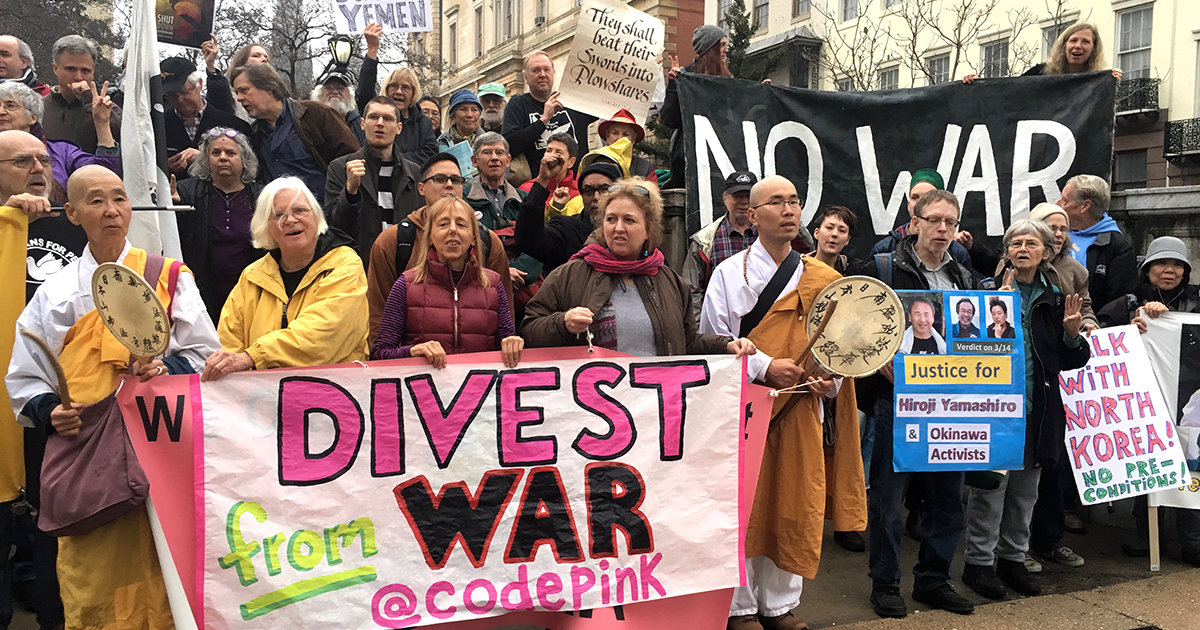 You can visit Codepink's Divest from the War Machine website at https://www.divestfromwarmachine.org/